As you may already know RPG Alchemy is hosting this month’s RPG Blog Carnival and this month our theme is The Combat Experience. In my personal experience one of the most often overlooked elements to a combat encounter is the environment in which the encounter takes place. Whether it’s the terrain, the illumination, or even the weather, the environment can be used to impact the nature of a combat in several important ways. 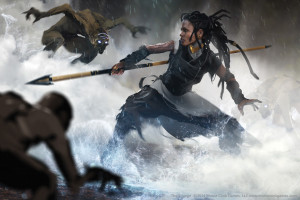 When thinking about the location in which a combat encounter may occur consider what aspects of the environment the heroes might use to their advantage. For example, areas a shadow or mist might be a huge benefit to stealthy characters. Superior elevation can be an asset to heroes that favor ranged weapons. The entire party can probably take advantage of anything providing cover. You should even consider man-made objects in the environment; a tall brazier of burning coals might prove to be a great improvised attack. Don’t forget the many ways in which the heroes’ abilities might also interact with the environment. Consider the sorcerer’s fireball in the library full of old scrolls, musty tomes, and ancient parchments. The archer’s attack from shadow against a well-lit enemy. Or even the possible impact on the enemy’s morale when the heroic warrior charges through intense driving rain, mud splashing with every pounding step, his berserker battle cry getting lost in the raging wind, and the look of fury on his face highlighted by the flashing lightning. Whether or not any of that is going to impact the game mechanically I guarantee the players will remember the scene!

One of the most common ways a GM will use the environment is outside of combat as a challenge or obstacle the heroes must negotiate and overcome. Don’t hesitate however to place environmental obstacles in the thick of a battle. Difficult terrain, such as loose rocks and scree or knee-deep water can not only be a hinderance to the heroes it can also hide additional obstacles such as pits, mechanical traps and any number of trip hazards. Mist, fog and shadow might require various perception style checks. Long-term exposure to weather might also impact the heroes through exhaustion, disease, or simple fatigue. Depending on the encounter and how difficult you want the combat, any number of environmental factors may, or may not affect the enemy. 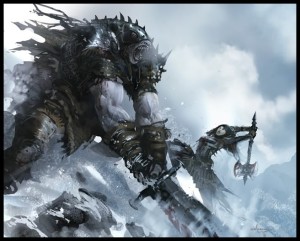 Using the environment in this manner is also a great way to adjust the combat difficulty on the fly. You can require the heroes to make more or less checks, adjust the result of a failed check from minor setback to heavy damage, and determine how much an enemy takes advantage of the environment. All of these things can be done easily and usually without the players even being aware of the moment by moment adjustments that you are making. It’s much harder to that with monsters and NPC’s without it seeming obvious to the players.

More often than not the heroes’ enemies will have the home-field advantage. Even creatures with only animal intelligence use their environment to enhance their combat effectiveness. Intelligent foes often find ways to use the environment as an asset while simultaneously using it to hinder or damage their foes. Even the threat of a hazardous environment, say a river of magma, may be used to potentially channel heroes onto the trapped stone bridge or funneled into an ideal ambush location. An enemy at the top of a hill covered in loose rock and gravel may have multiple opportunities to perform ranged attacks while the heroes attempt to close the gap.

You should also pay close attention to how the environment impact the heroes’ senses. Obviously smoke, shadow, and fog can limit visibility, but so can rain, snow, and even intense heat. Being in a storm seriously affects a hero’s ability to see and hear. Even a little bit of wind blowing through a forest causes a lot of noise (rustling leaves, creaking branches) and impairs vision (trees in motion, brush moving). Heroes not native to an environment may be severely impacted especially once a fight breaks out with the locals. Ranged combatants in particular should be hindered by environment concerns, not only does target acquisition become difficult but the environment may also affect the projectile itself. 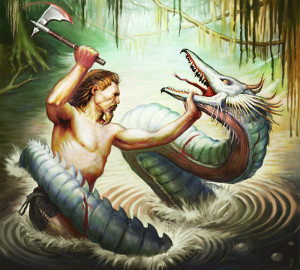 It’s important to remember that the environment the heroes find themselves in can be so much more than scenery. Using the environment can completely alter the flow and rhythm of a fight as heroes deal with challenges beyond simply hitting the enemy and players are forced to make different tactical considerations outside their comfort zone. Environment forces players to adopt new strategies instead of always relying on their standard operating procedures. It can make an encounter with low-threat enemies much more challenging and unique. And finally one of the most important reasons to consider the environment, it adds several layers of intensity and verisimilitude to even the most standard of combats.

Your players will never forget it (or forgive you).