Free PDF Contest details at the end of the review! 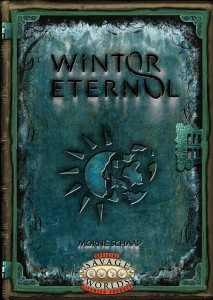 I recently received a review copy of a new Savage Worlds game setting called Winter Eternal. The book was created and developed by game designer, Morné Schaap. The setting is best described as a post-post-apocalyptic (yes double-post) fantasy world with a cool twist (pun intended). The world of Azegar was plunged into a frozen cataclysm when the sun exploded into a shell of its former self. With well over a century passing since that incident, the world has rebuilt itself into something far different from what it once was.

Winter Eternal uses the Savage Worlds game system. These are the core rules used in all of Pinnacle Entertainment Group’s current roleplaying games, such as Deadlands, 50 Fathoms, Weird Wars: Rome, and more. This will be a bonus to those who love the game system and a negative to those that don’t, but by simply using the Savage Worlds game system Winter Eternal comes with an immense amount of product backing. There are core rulebooks and numerous companion products already available for the system.

The defining characteristic of this game is its setting. The name, Winter Eternal, accurately describes the new state of the planet. Prior to the frozen cataclysm, Ehlerrac was a lush and green continent on the world of Azegar. The various races of the world enjoyed prosperity and contentment as the average citizen was blessed to live out a relatively happy life. Then for an unknown reason, the sun exploded into a wave of fire that incinerated one half of the planet and left the other half in frozen darkness.

With only a shard of the sun left, the remaining world was plunged into a variety of natural disasters including earthquakes, tsunamis, and meteor showers. Much of the planet’s population was destroyed and only two dwarven cities that were somewhat protected underground remained. With much of the population trying to get into the dwarven cities, they closed their doors leaving those outside to fend for themselves.

But the rumors began to circulate about new camps with food and heat that were springing up in the frozen wastelands. A mysterious group called The Green Council built five such camps, each started by in individual Nature Warden. These five camps became the basis for a new civilization, albeit a harsh one.

Eventually, additional areas began to grow. Archways were built to connect the cities and new technologies were discovered by Artificers with special crystals called “sunshards”. Organizations began to develop and trade between the various settlements began to grow. Although the world is still a harsh place, 140 years after magical globes went up over the major cities, hope is starting to creep back into the minds of its people.

The game contains many of the classic fantasy races that players will recognize, as well as unique races specific to the Winter Eternal setting. Dwarves, Elves, Goblins, Humans, Half-Folk, and even the Ork-Tainted should be familiar to any experienced fantasy roleplayer. But the Grayns (fierce warrior dog-like race) and Mekellions (quiet and mysterious lizardmen) are races that add additional flavor you will only find in the Winter Eternal setting.

Although Savage Worlds games don’t use classes in the same way that many other roleplaying games do, there are classes (or archetypes) that players of fantasy games will be familiar with as well as unique ones. Classes like the Bard, Cleric, Thief, and Wizard will provide something very familiar to players. But there are also classes like the Follower of Frost, Ice Runner, Nature Warden, and The Voiceless that are setting specific. Overall there are well over a dozen classes that players will have to choose from, or they can make up something completely unique unto themselves.

This core book also provides information on commonly available gear, as well as setting specific gear. It also goes into detail about cities and civilization in the world, specifically the eight major cities that exist. There are also numerous organizations and NPCs provided, as well as information on several religions, “The Three Hells”, a calendar with various festivals, magical powers, and a small bestiary.

The two major positives for me about the product are the incredibly unique game setting and use of the Savage Worlds system. If you read the entire book, the setting really sets itself apart from other fantasy offerings on the market. The book has many unique ideas that I’ve never run across in another fantasy game. The world is also unique enough that there are things that would occur in this world that don’t occur in other fantasy settings. Yet, the setting isn’t so obscure that it is difficult for new players or game masters to grasp.

I also like that it uses the Savage Worlds game system. This may be a turn-off for a few players that don’t like the system, but the benefits of using their system far outweigh the negatives. Using this system gives it instant recognition to many gamers. The system is also a very easy system to grasp and easy to run at conventions. This will allow the setting to be easily introduced to new players, which should contribute to the game’s long term success.

The two negatives that stand out to me for the game are the copy editing and inconsistent artwork. Throughout reading the book I found numerous spelling mistakes, grammar errors, and formatting issues. And although some of the artwork is awesome, the artwork as a whole is very disjointed and does not conform to any standard within the product. The art was clearly done by multiple artists that had no connection with what the other artists were doing or what their art would look like.

Things that I would love to see in the future for Winter Eternal would be city books going into detail about each major city, a source book on life outside the archways (in the ice), a monsters compendium with additional creatures, and a book that goes into further detail about the continent of Ehlerrac. In any future products, I’d also like to see the use of a professional copy editor and more consistency with the artwork.

Overall, I’m very impressed with Winter Eternal as a whole. I think it was a great choice to use the Savage Worlds game system, as it provided a recognizable and friendly framework for players of the game to use. This clearly allowed the game designer more time to work on the setting, which shows in the unique history and aspects in the world. The game is definitely one my friends and I plan to play (a friend of mine already backed the Winter Eternal Indiegogo campaign and is a featured NPC in the book). I hope that game designer Morné Schaap continues his work on Winter Eternal and develops more products out for the setting in the future. Check out Winter Eternal!

Free PDF Contest: As an added bonus, game designer, Morné Schaap, is offering up a free PDF copy of the game through DriveThruRPG to RPG Alchemy readers. All you have to do to enter the contest is comment on this review through RPG Alchemy’s social media channels. Either leave a comment of the review on the post at RPG Alchemy, or comment on the review via our Facebook page, Google+ page, or re-tweet on Twitter.

Each social media channel will count as one entry into the contest, so a single individual can have up to four entries in the contest (WordPress comment, Facebook page comment, Google+ page comment, or retweet on Twitter). In approximately one week from the review posting, we will post an interview with Morné Schaap. That will signal the end of the contest and a winner will be declared via random drawing. The winner will receive their PDF copy of Winter Eternal from Morné Schaap through DriveThruRPG.