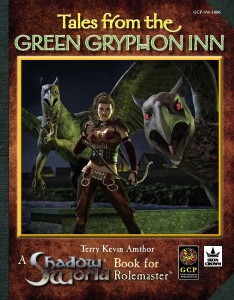 Tales from The Green Gryphon Inn is a Shadow World adventure book for the Rolemaster system. The book is by Terry Kevin Amthor and brought to us by Iron Crown Enterprises (I.C.E.). The book brings us to a town located at a crossroads in the heart of the ancient kingdom of Jaiman, but specifically to one area of note: the Green Gryphon Inn in the town of Gryphonburgh. Besides being known as a great place to stay and its cold, home-brewed beer, the inn is a jumping off point for adventure in the area. With the recent disbanding of a local army, many of those soldiers have turned to crime. The highways of this area are very dangerous while adventures and opportunities abound.

There are five parts to this book which include; an overview of Gryphonburgh, places of interest, people of interest, adventures, and a final section that includes NPC charts, area maps, and an index. The book introduces a new feature of GM Narration Text to the book, which gives the game master text to read aloud to the players when they encounter a certain person, place, or thing. The book is specifically designed as an adventure book and not necessarily a sourcebook, so readers will find many adventures scenarios and adventure ideas sprinkled throughout.

The first part of the book gives a general overview of the town of Gryphonburgh. This includes a one-page map of the town, a physical overview of the town and its surroundings, town highlights, and even discusses local weather, flora, and fauna. Certain locations and people of interest are discussed later on in the book. If you are not familiar with the Shadow World setting, this area will give you the sense and understanding that Gryphonburgh is a town that operates in a high-fantasy world that contains powerful magic, deities, and has a constant struggle between good and evil. There is magic and fantastic (or horrible) creatures in this world and Gryphonburgh provides one of the few solaces against these things.

The book then discusses primary places of note, which include the Green Gryphon Inn, the Gryphon Bridge, Gryphonburgh Castle, the Orgosian Moor, and other ruins in the area. The Green Gryphon Inn is extensively detailed and includes rates and services provided there, an extensive layout of the inn with multiple maps and a detailed description of the building. This information on the inn alone spans eight, detailed pages of information. The section also discusses the Gryphon Bridge which is the architectural feature that gave birth to the town’s name. Gryphonburgh Castle is the home to the local Count and his family. The Orgosian Moor is an open, undulating, treeless plain that lies to the south of the town. There are also two other areas of note described, stone circles and barrows that are nearby the settlement.

The third section discusses people of interest that are either individuals of prominence in the area, or simply just interesting people who live in the area. There are numerous NPCs included here, such as individuals that work in the Green Gryphon Inn, other proprietors and characters inside the city, the County and his family, and other personalities that frequent the area. It also includes four groups that are notable organizations in the area that PCs may encounter. All of these NPCs and groups are potential allies or enemies for player characters.

The fifth and final section of the book contains a variety of items for the game master, such as aids, stats for the NPCs and beasts, as well as regional maps. This section contains statistics for both the Rolemaster Second Edition/Rolemaster Classic format and the Rolemaster Standard System/Rolemaster Fantasy Roleplaying version. It also includes the Index and a list of other Shadow World Books that are currently available for sale, as well as future books that are coming soon.

Although I am familiar with ICE and Rolemaster, I have never played a game specifically set on the planet of Kulthea (the Shadow World). This adventure book really feels like a throwback book to me on how adventure books and sourcebooks used to be done. There is an incredible amount of detail in every area of the book, from the inn, town, and area, all the way down to the inn’s housekeeper, Mapa Leng and her living quarters. That kind of specific detail isn’t something you find in a lot of modern-day roleplaying books and really appeals to the old-school, nostalgia-loving part of my gamer personality.

Even if you are not a Rolemaster player, I truly feel that this book could be dropped into almost any high-fantasy setting. If you are a game master with your own fantasy world, or you’re keen on modifying some other established setting to your own tastes, it would be extremely easy to drag-and-drop the ideas presented in the book in your game. It contains some fantastic places, characters, adventure ideas and fantasy flavor that could be a great addition for any game. Any fans of this book can find more information on the Shadow World in the Shadow World Master Atlas, as well as two new editions of sourcebooks scheduled to be released soon, Jaiman and Citybook: Haalkitaine.

Tales from the Green Gryphon Inn, a Shadow World Book for Rolemaster, is available at DriveThruRPG.com or RPGNow.com! Check it out!