I recently was contacted by Alvaro Arteaga Garcia about a new board game called Ether Wars. The game tries to fuse elements of modern board games, abstract strategy games, MOBAS, and RTS video games all into one! It is designed for two to four players, takes approximately ninety minutes for one game, and is recommended for ages fourteen and up.  Ether Wars is currently funding on Kickstarter.

The game is set in a world of science fiction and fantasy on a planet called Etheria. This planet was special in that it contained an energy source of near unlimited power which the planet’s inhabitants called Ether. Because of this, civilization on this planet rose to unimaginable heights of power. But one day, this civilization, for an unknown reason, left the planet and disappeared without a trace.

Before the people of the planet left, they chose a select group of worthy representatives to protect this energy source that they valued so highly. This chosen group was called, The Council. Their mission was to protect the Ether until the rulers of the planet returned. They gave The Council rules and regulations that would involve any species that desired access to the knowledge of and powers granted by the Ether. Any species requesting access to the resource would have to participate in the Ether Wars. The winner of this tournament would be allowed to sit with The Council through their champion and gain access and control of the Ether.

Ether Wars has four playable factions: Dracons, Humans, Rippers, and the Vai. Each species has a unique back story, a species player board, special skills, and unique unit dice and hero dice for their faction. Each faction brings something different and unique to the game. Different players may discover that they prefer a specific faction to match their play style as they begin to learn and understand the game play and mechanics. 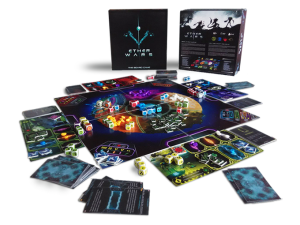 As they arrive on Etheria to do battle, each player begins the game with five unit dice, their respective Hero, a supply of twenty proteins, and a charge counter that the player can use to activate the effect of one of their species’ special skills. The game contains seven phases of play: 1 New Day, 2 Reinforcements, 3 Mercenaries, 4 Placement, 5 Movement, 6 Resolution, and 7 Maintenance. There are additional factors that affect the combat and gameplay, such as Event Cards, Zones (Biosphere, Plasma Chasm, Coltan Mine, Crystal Sea, and Ether Fault), the Market, Silos, the Factory (Cloning), the Citadel, and Council Mercenaries (Oriuk the Captain, L33 the Drone, Iruo the Assassin, Narim the Thief, and Avea the Priestess).

Ether Wars players engage in complicated and strategic combat each using their own unique abilities and characteristics to win the tournament. The objective of the game to acquire a specific number of Ether before the other players. This number depends on the number of players playing the game. Two players require seven Ether to win, three players require six Ether to win, and four players require five Ether to win. Throughout the game, they will have to decide the best tactics at each moment to acquire necessary resources, battle the enemy, defend their base, and fight for the Ether resource to win the game!

Overall, I found the artwork and games pieces to be very visually appealing. Without a physical copy of the game, I was unable to truly play test it with the actual game pieces you’ll receive in a retail copy, but I am a huge fan of the science fiction genre in all types of games (tabletop RPGs, board games, and card games). I enjoy strategic board games that contain resource management components and unique factions. I always find it enjoyable as a player to see what faction I end up settling on as my favorite, while other players I play with settle on their preferred faction. Each typically will have something that plays to the strengths of the player playing it. Exploring the game mechanics of each faction is one the more enjoyable points for me, since playing a different faction is like changing the game for yourself the more you play.

If you like strategic player versus player board games with a video game element infused into it, go check out their Kickstarter page or their website to learn more about the game. You’ll be able to learn more specifics about Ether Wars and see what the different Kickstarter backer levels and stretch goals provide for the game. Check it out! 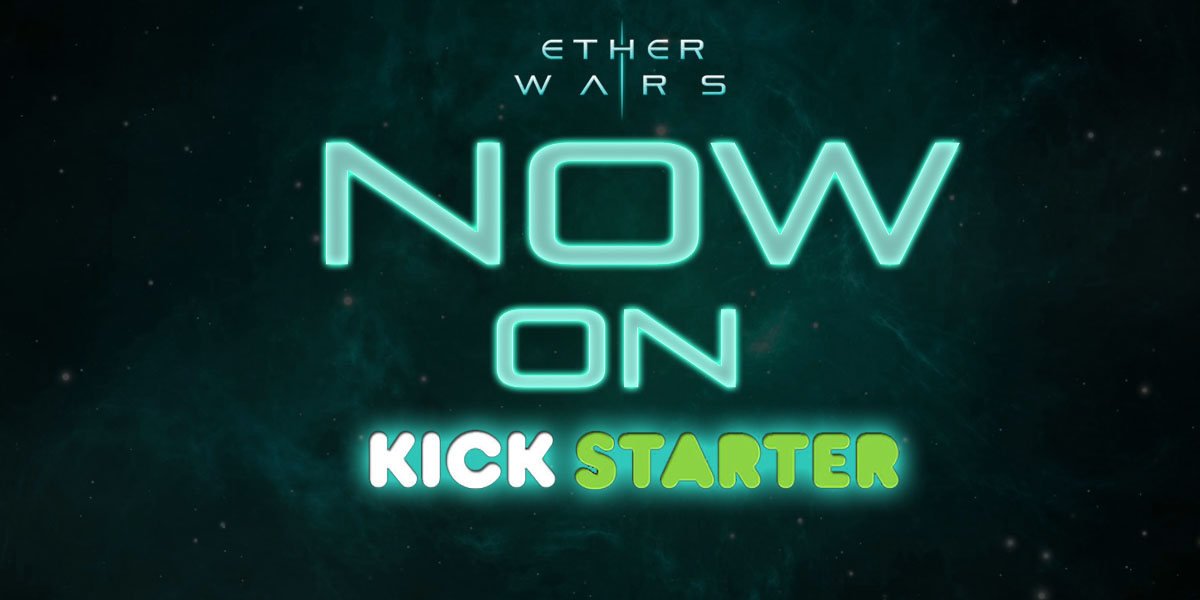