Andrew Valkauskas is the author and designer of the Fate of the Norns: Ragnarok game setting. It is a roleplaying game that conjures up the heroic adventures of Viking sagas. Andrew’s new project is called the Illuminated Edda. It is a modern retelling of the Prose and Poetic Eddas. The project is funding on Kickstarter and is something worth checking out for both roleplayers and fans of Viking mythology.

1) What is the Illuminated Edda?
When someone thinks about Icelandic or Norse mythology, the definitive books that come to mind are the Prose and Poetic Eddas. These legendary manuscripts are akin to the Viking bible. Written roughly 1000 years ago, they immortalize the culture and society of the northmen. The Illuminated Edda is a faithful homage to both the Prose and Poetic Eddas. The narrative retells the contents of both classic manuscripts, along with additional tales that fill in the many gaps that exist within the myths. Instead of a stuffy academic translation, you can expect entertaining contemporary language that grips you and doesn’t let go. The Illuminated Edda contains beautiful full-colour artwork on each and every page. This book will tell the tales of the gods, the giants and many other wondrous beings who inhabit the world tree Yggdrasil- from the creation myths all the way to Ragnarok, the twilight of the gods.

2) How is the Illuminated Edda different from other books that discuss the same topic? 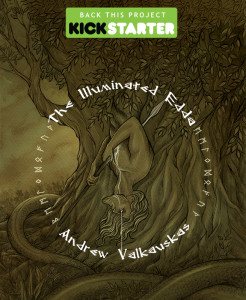 Publications of the Eddas are usually written using stuffy academic language and the pages are laid out using walls of text (no imagery). Our homage is to retell the tales accurately using entertaining language and evocative artwork on every page. But the most striking difference will be in the new chapters. As I mentioned earlier, the Viking myths have many holes and contradictions. The new sagas are the mortar that turns an old ruin into a castle. These new sagas will help tell the complete and cohesive story.

I’ve studied the Eddas for 20 years, and I have put a lot of thought into how the cosmology should come together as a vivid and living tapestry of tales. These new stories are written with the utmost care so that they blend in perfectly with the existing body of Viking epics. Wondered about the world before Ymir? Why do Valkyries carry the dead? How did the Aesir-Vanir war unfold? Why are the Dvergar ignoring the Norn prophesies? You will find maps of the realms as well as full sized pantheons for all of the divine races: Aesir, Vanir, Rime Jotun, Muspeli Jotuns, and Dvergar.

3) What inspired you to create the Illuminated Edda?
I fell in love with these texts over 20 years ago, and after writing several books and designing games based on the myths, I felt it’s time to release my tribute to the Eddas. In 2012 I put together a 5 year roadmap for the intellectual property. This includes RPG games, other types of table-top games, novels, digital media and other mediums.

The Ragnarok RPG has a mapped out progression for 2015 and 2016. The last Fate of the Norns book we released was all about Midgard- the realm of mankind. It turned out to be a whopping 424 pages! In the next book we had to cover Asgard, Vanagard, Jotunheim, Muspelheim, Nidavellir and Niflheim. We’re looking at over 1000 pages easily. In order to control book size we decided to split the next book into 2 separate books: The Illuminated Edda (for everything story and lore related) and Lords of the Ash (for all of the new game content and mechanics). Even split, they will be massive tomes.

4) How could the Illuminated Edda be used in conjunction with the Fate of the Norns: Ragnarok RPG?

In the Core Rulebook, we do a quick 30,000’ flyover the mythology and history of the Fate of the Norns Vikings. Then the lore books drill down into the mundane and supernatural of every realm. We have another one planned for next year called War of the Shadow which will encompass the realms of Alfgard and Svartalfheim. Anyhow getting back to the Illuminated Edda… the book will contain stories about the heavens, bios on the gods, giants and dwarves, expanded exotic locales, major historic and world shaping events, how the afterlife works, the adventure hooks that will take adventuring parties across Yggdrasil, maps of the worlds and much more.

5) Why should people buy the Illuminated Edda?
If you’re a Fate of the Norns: Ragnarok player, it’s a no brainer. 😉

If you play a different RPG system and need a solid lore book for your Viking campaign, this is it. The Illuminated Edda has no game mechanics within, so it’s the perfect universal source book.

If you are new to Viking mythology, you’ll find everything you’re looking for between these covers.

If you’re a veteran and have several translations of the Eddas already, you will find wondrous new epics that bridge all of the gaps and inconsistencies which exist within the originals.

Kickstarter: This project will be funded on Sun, May 31 2015 5:00 PM PDT. The artist for this project is Natasa Ilincic and the layout and design are being done by Kyriaki Sofocleous.