Last week I attended in the second annual RageCON¡¦in Reno, Nevada. It was a great con and extremely well-organized. I ran a game of Numenera for several people who¡¦had never played before and I had the privilege of being a guest speaker on two different panels (both focused on RPG’s). One of the things that came up during the panels, as well as with the players in my game, was my apparent utter lack of GM preparation. This week I thought I’d expand on that.

I’ve talked in previous articles about the way in which I run a campaign, which is to say I don’t script out adventures or plotlines. I work off of a handful of various elements that I can pull from to create a story as the characters’ actions unfold. These elements are usually no more than a bullet point with a single sentence that allows me to follow the narrative in a more natural fashion rather than trying to keep a predetermined story on track. My game prep is usually nothing more than a couple of note cards each containing a few interesting elements. My primary set of notes when I run a game is a list of ideas¡¦usually divided up by location or theme. I thought I’d share some of these Encounter Elements focusing on interesting things that could happen when the heroes are in a “civilized” settlement. 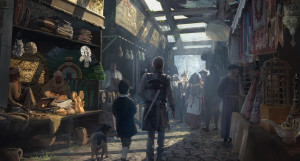 Just a handful of ideas like the ones above can fuel dozens of adventures or even an entire campaign. Many of these could be combined to produce really interesting situations. Players love to investigate the interesting and the unusual so sprinkle these things throughout your campaign and sit back and see what unfolds.