First a quick recap. I talked about a few preliminary things to think about in the prelude¡¦article before starting a new campaign. In Phase 1¡¦I discussed putting together a list of initial campaign elements based on observations and conversations with players. Last time¡¦I talked about the campaign’s look and feel. In this phase I’m going to take a look at one of the most important (and frequently overlooked) components of campaign design; the party concept. 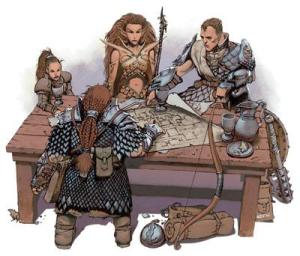 This part of campaign design is most effective when done as a collaborative effort between the GM and all the players and has become the cornerstone of the last few campaigns I’ve run. Way back in the day when I was playing AD&D in the 80’s, it was enough for our games to be about a group of “adventurers”. In my teens we didn’t really think about the why these characters were adventurers or what had brought them together. These days our group puts a lot of effort into the party concept with the goal of having a clear answer to the following questions prior to character creation:

When our group sits down and starts asking these questions and coming up with answers we consider the various elements that we’ve discussed as well as the look and feel of the setting (phases 1 and 2). We’re looking at how the characters are going to interact with the setting and the stories featured in the campaign. Not only does this form the players’ core connection to the campaign but it also helps put the entire group on the same sheet of music; you don’t want one player thinking that this story is about fantasy monster killing and loot grabbing when everyone else is telling an emotional story of gothic love and betrayal!

There is no end to the number and type of party concepts you could have in an RPG. Some games define the nature of the character group right up front. In Shadowrun the characters are all assumed to be shadowrunners and in Dark Heresy¡¦the default assumption is for characters to be acolytes in service to an Imperial Inquisitor. Other games like Dungeons & Dragons and Numenera are much more open. Regardless of the game there is still plenty of room for additional definition. Below is a series of questions and possible answers to consider when building the party concept:

Does the party have a job (beyond adventuring)?¡¦They could be mercenaries, a team of bounty hunters, a criminal group, traders or smugglers. They could be employed as explorers, scouts, guides or elite soldiers.

If employed, who do they work for? Any number of patrons might employee the characters. A church or cult, a kingdom, city or other political entity, or even a private party such as a sage, guild, or noble house.

If they aren’t employed why do they adventure? Maybe they are the defenders of their hometown, the right people in the wrong place, they could have been set-up or maybe they are allies thrown together by circumstances.

If they were thrown together by circumstances, how? Maybe they were the last survivors of a disaster (natural or otherwise). They might be escaped prisoners or possibly even slaves attempting to escape their fate. 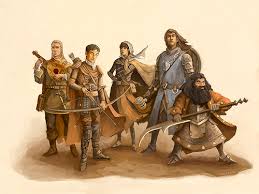 Consider how to manifest the party concept with your campaign elements and the setting’s look and feel. If one of your elements is travel and exploration then perhaps a party of traders, smugglers, or explorers might be the perfect way to capture that. Urban adventure might be portrayed best through the lens of a party of thieves or even through a group of city guardsmen or investigators.

Over the years I’ve discovered that one of the biggest pitfalls to a great game experience is disconnect. When ¡¦a player doesn’t feel connected to their character or to the other characters or even to the setting, they start to lose interest and are more easily distracted from the game. By creating a solid party concept you go a long way toward ensuring the players are on a similar page and are working together to move the campaign in a compatible direction.

The party concept is one of the most important elements for the players to connect with the campaign. Their character may be their avatar in the world but the party is the thematic interface between the characters and the setting. The party concept also informs quite a few decisions each player needs to make when they create their character, which is exactly what we will discuss next time in.