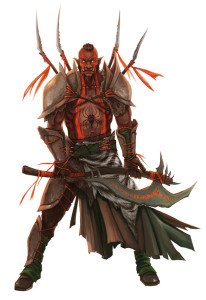 Character quirks can be little exercises in roleplaying that make things fun for the player. They can also have major game implications if the character is faced with a dilemma where two of their values come in conflict. Here are 101 player character quirks that can be used in many different types of settings. These quirks vary from small quirks (small effect on game play) to big quirks (potentially large effect on game play).

1. Will not ever drink alcohol.

2. Can’t leave a bar without having a drink.

3. Treats his weapon like the love of his life.

4. Treats his steed or animal companion better than people.

5. Will not ride an animal.

6. Always makes religious gestures when leaving a temple even though he is not religious.

9. Prefers to sleep outside over sleeping inside buildings.

11. Takes trophies from all of his kills.

13. Occasionally speaks in another language that no one understands (since it doesn’t truly exist).

14. Walks barefoot everywhere, does not use footwear.

16. Only wears one specific color of clothing.

18. Requires being pampered whenever available (hot baths at inns/massages while in town/fancy meals in restaurants/etc.).

19. Obsessed with creating a written chronicle of his journeys.

20. Obsessed with creating songs about his journeys.

21. Always sings songs when traveling from one destination to another.

22. Doesn’t like children and is incredibly awkward when dealing with them.

24. A specific weather condition (rain/snow/wind/etc.) incites the character to fight.

25. Can’t sleep in total darkness, needs some kind of lighting.

27. Adds tattoos to his body for every new place he visits.

28. Will only ride one specific type of animal (horse/donkey/elephant/etc.).

30. Doesn’t ever carry money on his person.

31. Leaves emergency stashes of supplies in every major area he goes to.

33. Believes vegetables (or some other type of food) are poisonous.

34. Carves a scar or tattoos himself when he commits a major sin against his deity.

35. His laughter always sounds incredibly devious and evil (regardless of alignment).

36. Fond of headbutting anyone he gets in an argument with.

39. Unnatural eye or hair color for his race.

40. Denies the existence of a force of nature (wind/earthquakes/floods/etc.) and always explains it away as something else.

41. Accent that seems to change on a consistent basis.

42. Believes he has animal empathy but in reality has no special powers with animals.

43. Prays for every corpse, friend or foe, that he comes across.

44. Must apologize to anything, person or animal, before he kills it.

45. Carries a mundane item (spoon/shoelace/broken key/etc.) in his pocket at the ready, “Just in case…”.

47. When time allows, always paints his face with “the colors of war” prior to combat.

48. Has a very odd nickname (Potato/Fingernail/Bub/etc.).

50. Always breaks out in a dance when he wins, whether it is an argument, a fight, or a game of cards.